A brief look into the Flamingo Renovations recently awarded to Americaribe, LLC. 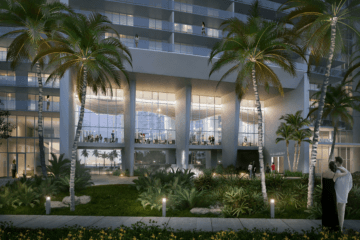 The Flamingo Residential Towers. Residing in South Beach, the complex currently includes a plethora of living units, amenities such as a swimming pool, fitness center, and a breathtaking view of the Biscayne Bay. This view alone is the reason why it is so pleasant to reside in the Flamingo complex, whether it’s the North, South, or Central towers. But it’s small living units and growing population are in need of a renovation. One that makes it feel more like a personal community.

With that, we are proud to announce that project owner Aimco has awarded Americaribe the preconstruction services contract for the Flamingo renovations project. Also known as Apartment Investment Manage Company, Aimco has owned over 45,000 apartment units, ranging across multiple states from California to Florida. Aimco will be fully managing the project as a whole, thus no 3rd party project manager overseeing the contracting companies.

Residing in South Beach, the Flamingo residential complex currently includes a plethora of living units, amenities such as a swimming pool, fitness center, and a breathtaking view. Through a joint venture with Grycon, the $150 million USD renovation project will take place for 3 years, having started in December 2017. This project, on the JV’s end, will focus solely on the North Tower and the external area surrounding its’ vicinity. Architecture design is done by Stantec, a company that has worked on projects such as Canada House, Carnegie Mellon University, Iqualuit airport in Northern Canada, and the renovated Wrigley Field.

After the first 12 months of preconstruction, a management team will be deployed similar to the ‘Brickell City Centre’ and ‘Arte’ projects. Part of the production team has already been deployed- including Chris Van Rooyen & Edouard Millet- assisting with the preconstruction, & prepping construction for all phases of the existing project.

The phases, in respective order, will consist of the following:

The renovations have been reported to also include landscaping changes & gutting units at the North Tower to make way for larger residential units (531 units), rising at about 15 stories.
Shown renderings were provided via Stantec.